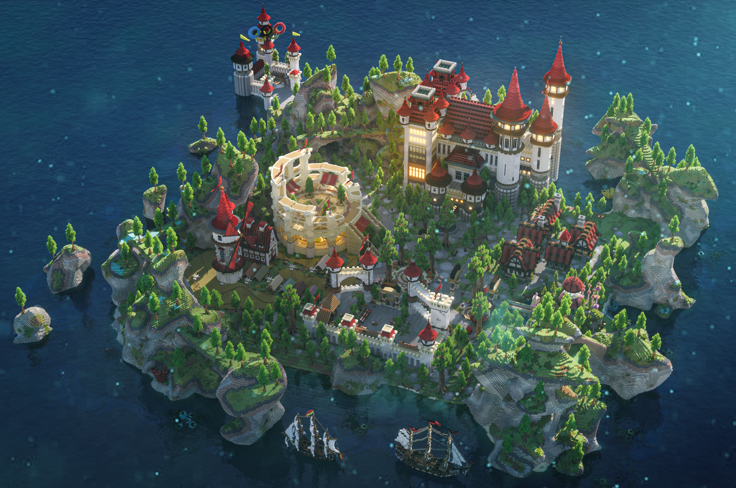 As you're reading this, Craftadia Season 4 is already live and ready to play, but our work doesn't stop here. We will be working on launch bugs and quality of life improvements in the coming days, and preparing new content that will be drip-feeding over time to keep the server active and interesting! For now, lets discuss the latest information and changes to Season 4.

Now, let's talk about how items will be able to be collected from the reset vaults this season. As we've said over the course of the last few days, vaults were closed at launch for 2 reasons; to ensure there were no issues like last season with vault rollbacks and item losses, as well as to encourage everyone to grind a little in the start. We want to bring back the fun of what a vanilla server is at its core; to start with very little and work your way up to the top. To bring this aspect of vanilla back to Craftadia, the process of collecting items from vaults after Season 4 launch will work differently than it has in the past.

We are confident that the change will allow for every player, new and old, to experience a vanilla server reset that isn't overfed with OP items in the start. We hope that the community will be just as excited as we are for this change, which allows for a feel of what Craftadia was like in its first seasons, when everyone started "brand new" to a survival world.

As of this blog post, reset vaults are opened to all players from season 3 who vaulted items, access your items with /vault.

This season's economy, we took a lot of feedback from our community, as decided in the economy poll in our discord server. Along with players shops, the economy will work based on 2 major components; the Blackmarket (for selling) and category based vendors (for buying). All of these merchants, as well as the head merchant and treasure merchant, are available at /shop.

The black market, otherwise referred to as the "BM" by much of our community, is partly a reintroduction of the economy in Season 2. This black market merchant will be buying 5 new items from players every day. Originally this merchant was to sell 3 new items daily, but after hearing many opinions on this during the economy poll, we decided to bump the amount of items sold. The merchant may buy the same item at a different price on some days, so the black market deal for potatoes may be higher or lower than on another day! The merchant is also a little picky, if you sell too much of an item to him he won't accept any more of the specific item until he returns with new deals.

Contrasting to the black market, there are 6 merchants to buy items from at spawn and are split by the following categories: Ores & Minerals, Mob drops, Nature, Food & Farming, Building Blocks, and Nether. These buy merchants will sell basic blocks and items at a fixed price. This means players can sell their own items for cheaper to other players through players shops and can also sell items that are already crafted, such as redstone components, for convenience.

To encourage grinding and player-run economy, the Ores & Minerals merchant will be disabled for the first week of the season.

It has been an ask from our community for a long time, to allow for private pvp-ing outside of the public pvp arena at spawn. We're excited to do just that with the addition of this as a feature this season and onward. This is done by introducing duel chunks, which allow for duels to take place within your own claims! You'll be able to designate specific chunks, and decide who can start a duel on a chunk-by-chunk basis. We've also made sure that you can link PvP chunks together, allowing you to create large arenas that can be the new focal point of your land by simply having 'Duel Invitations' turned on in neighboring claims.

To make sure that this doesn't impact upon your experience, PvP will only be enabled for those players who are in a duel after accepting a duel invite, and within the chunk area, viewable in /map when hovering over a claim. At all other times, it will be disabled, allowing for you to continue with a safe pvp free zone within your worlds. To initiate a duel, run the command /duel challenge [name] on an opponent, when they accept your invite with /duel accept [name] both players can pvp each other.

We are introducing a completely brand new type of crop, seasonal crops! Seasonal crops will require special attention, as they can only grow and be harvested at certain times of the year. If players don't harvest their seasonal crops before the respective season ends, then the planted crops will die out and not give any viable produce upon harvest.

With the cool sun of Spring, avocados will be able to be planted and harvested in the months of March, April and May, before the remaining planted crops will be scorched in the summer heat. In the warm heat of summer, pineapples will flourish. In the cool breeze of autumn, butternut squash will thrive until they fall from their stems for picking. Lastly, in the frosty bite of winter, garlic will bury deep into the earth and prosper.

Additionally, for vanilla and custom crops we've added new crop barrels. These barrels can be used for decoration whenever you want! First, players must create an empty barrel, to fill the barrel with a crop just surround it with 8 of the specific crop. These recipes can easily be found in /recipes at any time.

Don't forget to speak to Farmer Bob near the barn in farmland at spawn to get your starter kit of seeds!

Along with seasonal crops, we are excited to announce Craftadia's very own custom foods. There are 3 dishes to be made with "all season" crops, which are; steak dinners, chips & corn salsa, and mixed berry pie. Custom food will give similar food stats as golden carrots, with 6 hunger points and 14.4 saturation points. Quite the filling meals, aren't they? These food recipes can be easily found along with our other custom crafting recipes by doing /recipes in game, but here is a preview of steak dinners:

Along with these 3 custom foods, with each seasonal crops comes its own food dish. Starting with avocados which can be made into some delicious avocado toast! Seasonal food items provide an additional boost in saturation to its non-seasonal food counterparts. Consuming seasonal foods will give players 1 minute of saturation effect, to a max of 10 minutes if multiple are consumed, so don't stuff yourselves too much!

If you missed it in our discord, we've released the map downloads for blue, yellow and green worlds! These can all be found at the following links

Please note these are large files (10-25GB each), and therefore will take a while to download and load!

We've mentioned the big changes in this post. Other miscellaneous small changes/ones coming in the near future will be mentioned in a post later this week. In the meantime our developers will be hard at work fixing lag issues and launch bugs over the coming days. Please be patient with our team as they work as quickly as possible to develop the best experience for everyone, and if you find any bugs please report them in our discord #bug-reports channel. Players can follow the latest bug patches and adjustments in the #change-log channel.

Expect more features over the coming weeks and months as we expand upon our existing content and add new ones. We hope these changes get you as excited as we are to release them! Until then, your new season journey awaits you.. Get your walking boots and pickaxes hard at work.